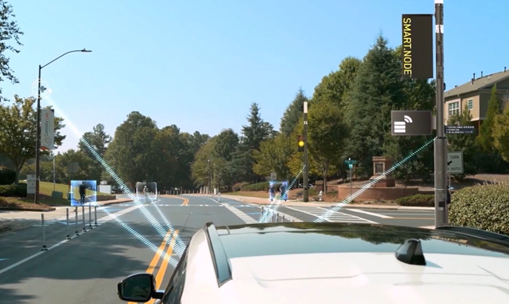 Innovation in Technology Park has been at the heart of the city since its founding more than 60 years ago. Technology Park was originally developed to bring in established businesses into its mixed-use community, creating the foundation of what would soon be known as the Silicon Orchard.

Over the past few years, the city and Technology Park has been reinvigorated and transformed into one of the United States’ first 5G smart cities powered by real-world connected infrastructure, bringing emerging technologies right into its city streets and leveraging public and private partnerships to create an award-winning innovation hub.

The Curiosity Lab at Peachtree Corners – a smart city living laboratory – came to life with one goal: to advance next-generation intelligent mobility and smart city technology. This real-world test environment enables early-stage startups, universities, and established companies to facilitate the development and adoption of emerging technologies in real-world conditions that can’t be replicated in a closed environment.

Recently, the City of Peachtree Corners was honored with the IEEE Smart Cities 2022 Jury Award. This award recognizes Peachtree Corners and the Curiosity Lab as one of the most unique and advanced smart city environments in the world, and emphasizes how the city’s smart city model serves as a blueprint for other US cities to implement and address the unique challenges found in various communities across the country. 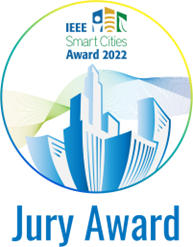 “The City of Peachtree Corners being honored by IEEE with its Jury Award is a reinforcement of our international position as one of the most unique smart city environments in the world. With economic development having been the focus from the beginning, we’ve created a model for better collaboration between public leaders and the top technology developers around the globe to advance the smart city concept in the United States. Our ultimate objective is to improve society and the daily lives and safety of our citizens, and we are proud to be recognized for our smart city efforts while not losing sight of our responsibility toward our citizens.”

The Smart City Blueprint for the U.S.

At the heart of the Silicon Orchard in Technology Park, the community can experience in real-time how the city is integrating technology into its city streets. The following include some of our smart city’s firsts that highlight the importance of public-private partnerships in implementing the latest technologies that improve residents’ everyday lives including:

At Peachtree Corners, we can confidently say there are six differentiators that make our smart city ecosystem unlike any other in the world. These characteristics all together are what contributed to IEEE Smart Cities awarding our ecosystem with international recognition. 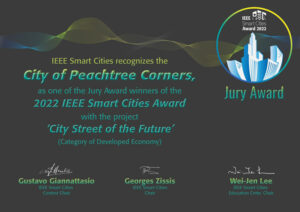 If you’re interested in learning more about how you can become part of our smart city here in the Silicon Orchard, want to explore the emerging technologies coming out of Technology Park or are interested in touring the Curiosity Lab, visit https://www.curiositylabptc.com.