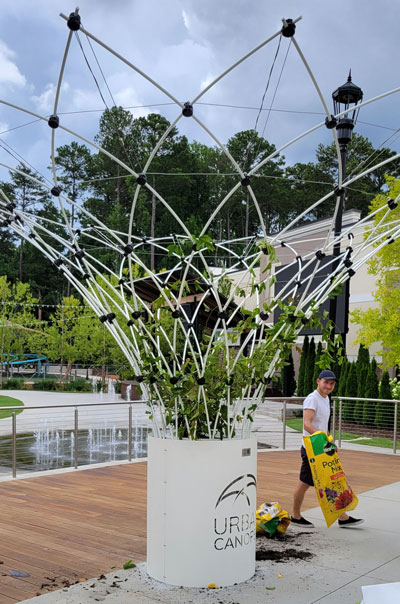 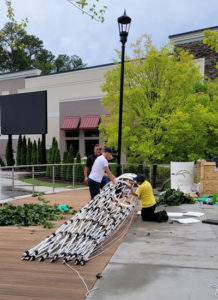 Peachtree Corners is the first place in the United States to receive an innovative and high-tech structure intended to cool down urban areas by greening them up. Called a corolle, the modular, vegetation-covered formation is the creation of French technology company Urban Canopee, which has chosen Curiosity Lab of Peachtree Corners as its launch pad into North America.

Curiosity Lab increasingly attracts tech startups and larger technology organizations from around the globe. Many come to test their smart city and intelligent mobility solutions in a real-world environment, and/or in the case of Urban Canopee, to gain proximity to American markets that may have use of their particularly innovative technology.

“During our worldwide expansion, we wanted to come to the United States because so many of its modern, concrete-covered cities experience the urban heat island phenomenon. We can help tackle that issue with our green technology,” said Loïs Lenhardt, technical studies engineer for Urban Canopee. “The Atlanta area seemed like a good place to start.” 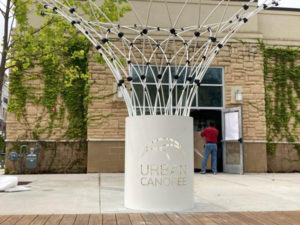 Peachtree Corners’ Town Center is also now home to a Mini Corolle – also called a Mini Canopee – from Urban Canopee. This product contains a steel-covered fiberglass base sprouting a mesh cylindrical, upward-and-outward-spreading canopy overlaid with climbing plants. When the plants mature, the Mini Canopee, equipped with its own irrigation system, will provide 215 square feet of shade to help create a cool place where summers are hot and provide additional biodiversity in the Town Center.

“Urban Canopee is committed to bringing vegetation to areas of cities where you could not plant trees because of underground networks, parking decks, subways, and areas covered in concrete,” said Lenhardt, who works at the offices of the French American Chamber of Commerce, Atlanta-Southeast, at Curiosity Lab’s Innovation Center.

Creating oases of freshness in cities

Increasingly long and intense heatwave episodes, growing air pollution, loss of biodiversity, and reduced availability of water are just some of the reasons why Urban Canopee aims to spruce up streetscapes while making cities cooler, more resilient, and more environmentally sustainable. Its technology-enabled low-carbon, energy, and water-efficient solutions are the company’s way to combat the effects of climate change while improving the quality of life for urban dwellers.

Before delving into the state-of-the-art Sensopee, each structure contains a small amount of substrate that relies on water to help the plants grow. The Mini Canopee’s passive watering reserve will need to be filled with close to two gallons of water a week – but doesn’t need to connect to the city’s water system.

The larger systems use the high-tech Sensopee, a smart irrigation system within the structure relying on sensors and weather-based technology to keep moisture levels optimal. Its algorithm optimizes the best conditions and water consumption to help plant roots grow. Urban Canopee employees monitor when soil is dry, and the water reserve is empty. When either or both occur, they text the customer that it’s time to refill the water reserve – about once a month during hotter seasons and once every two or three months when temperatures cool.

In addition to the one in Peachtree Corners, Urban Canopee has installed 164 other self-standing, autonomous green structures in 63 countries in Europe, Saudi Arabia, Morocco, and Australia.

Expanding its line of green products for urban areas 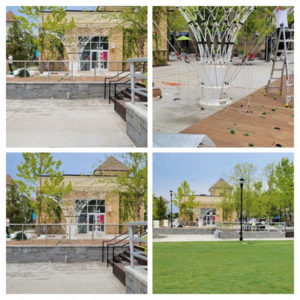 While in the states, Lenhardt hopes to generate interest and momentum so others will consider purchasing or offering the company’s canopies to customers. Potential partners include municipalities, landscape architecture firms, or any organization dealing with engineering greenspaces. In fact, Urban Canopee relies on such partnerships for its optional maintenance plans in which a local landscape company, for instance, would weed, mulch, fertilize, stake, and prune the plant structure three times a year.

In the next couple of years, Urban Canopee plans to use the same technology comprised in its corolles to add green, vegetation-covered roofs and facades to its line of products.

“Our canopies bring movable vegetation to urban areas and add significant value and a better quality of life,” Lenhardt said. “We hope to have several more of them in North America by the end of the year.”

Keep up with our latest trips and innovations

If you are interested in learning more about Curiosity Lab’s real-world testing environment or scheduling a tour, please reach out to us here. Testing is free and open to all technology companies from startups to Fortune 500.

To stay in the know, subscribe to Curiosity Lab’s blog by entering your email address on this page. You will be notified when Curiosity Labs posts content each week about smart city & intelligent mobility projects being tested at the Lab, events, announcements, and more.

*Heat islands are found in urbanized areas that have higher temperatures than outlying areas. This is because city structures, including buildings, sidewalks, and roads, absorb and re-emit the sun’s heat more than forests, water bodies, and other natural landscapes.